This one might become a l i t t l e bit special.

As most of you should know by now I am not only a specialiolo(lo)gist (for everything) but also one astonishing (specialiolo(lo)logic) lightjockey – at least in my second life on most of my weekends.

When LJ’ing I use the the GrandMa Lighting Desk most of the times. Sometimes I’m lucky and get to work with a hardware unit but most of the times I have to stick to the PC version with a Midi-Keyboard attached. So far so good / bad. Over the last years I came across some things that might be better. Like Midi output. Talking about GrandMA it IS possible but kind of limited and a huge amount of time is killed when taking care about Midi programming. (Those of you who are familiar with the GrandMa might argue pro and con. Others might just not know what I’m talking about…just read on.)

The software has some cool side-features like settings being saved in the registry ‘n stuff but like every program it’s still not complete (DMX in, Midi out indicators not working yet). But worth the effort. The basic Midi-IO is handled via MidiOX, again. 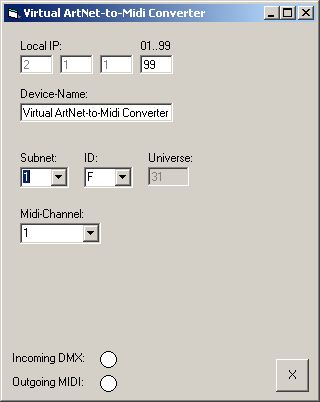 When I did this program I already had some idea in my mind. The aim was to drive Resolume via my GrandMA (onPC). You might argue that there are other ways to do this: You might, for example, drive Resolume directly via DMX. This one did not turn out to be a solution for me because you either need an Enttec pro USB-Interface (which I just didn’t want to buy) or you might control it via ArtNet directly (which I just didn’t get to work). After all, the possibilities you have over Resolume (v2) when using DMX are just nothing compared to those you have via Midi.

On the other hand side one might argue that MA-Lighting (the makers of the GrandMA desk) offer their own, integrated, video solution for the GrandMa Series. Yep. Talking about ~3500€ for a single license. by the way: May be in some time GrandMa Video will be as good as Resolume but speaking of today (April 2009) it is nothing more than a better video player with some basic effects. It just doesn’t even come close to Resolume’s features.

There are plenty of other possible uses. You are not limited to GrandMA or any of MA-Lighting’s products. Anything that puts out DMX data might be used. I’ll just stick to the GrandMA example becaue that’s the way I’ll be using it.

This picture surely IS a bit crappy but it might be helpful to understand what’s going on here. 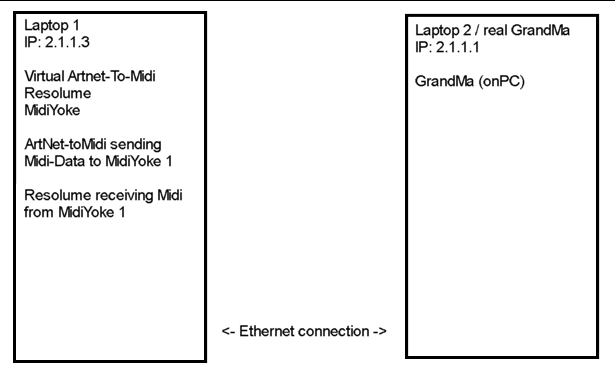 Let’s assume that Laptop 1 is up and running, Virtual ArtNet-to-Midi software is started. When you discover your GrandMA’s possible DMX outputs it will display just like an ordinary ArtNet node (click for a larger image). 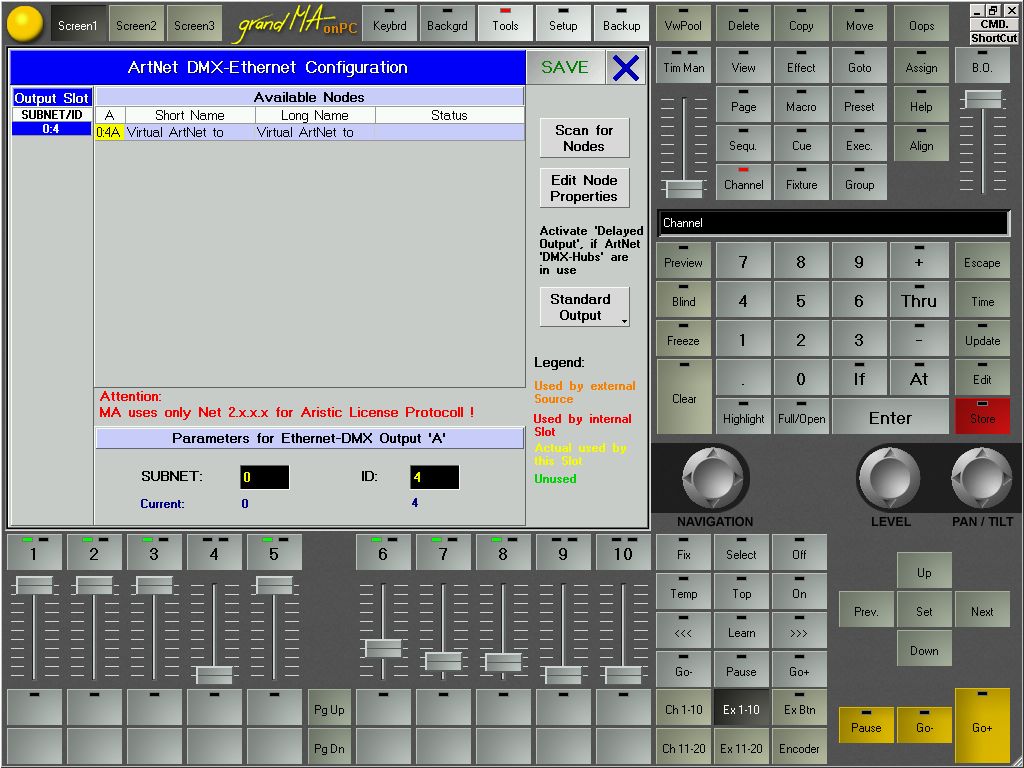 Note: When using GrandMa onPC you need at least one MA-Lighting 2Port Node which not only acts as a ‘real’ DMX output but also -and that’s its only job in this case- as a copy protection / rights management / whatever.

Changing DMX output values at the GrandMA will lead to some kind of reaction on the client side. See MidiOx’s output of DMX channel 1 being faded up. At the bottom you see the reaction of DMX channel 129 being flashed to ‘full’ for two times. 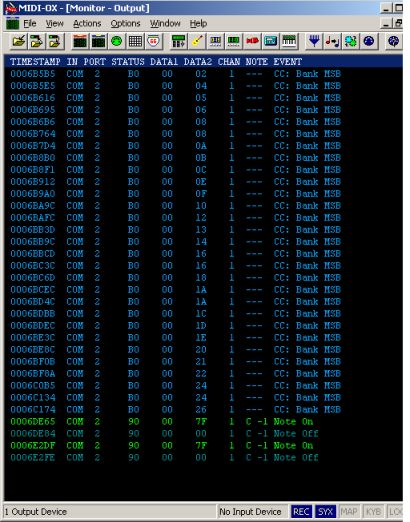 Now you can start and configure Resolume to react to these Midi Values the way you want. One idea might be to have your page of ExecuterFaders that control each layer’s opacity and speed. In Resolume faders are controlled via Midi CCs so you take some of the first 128 DMX Channels for this job. 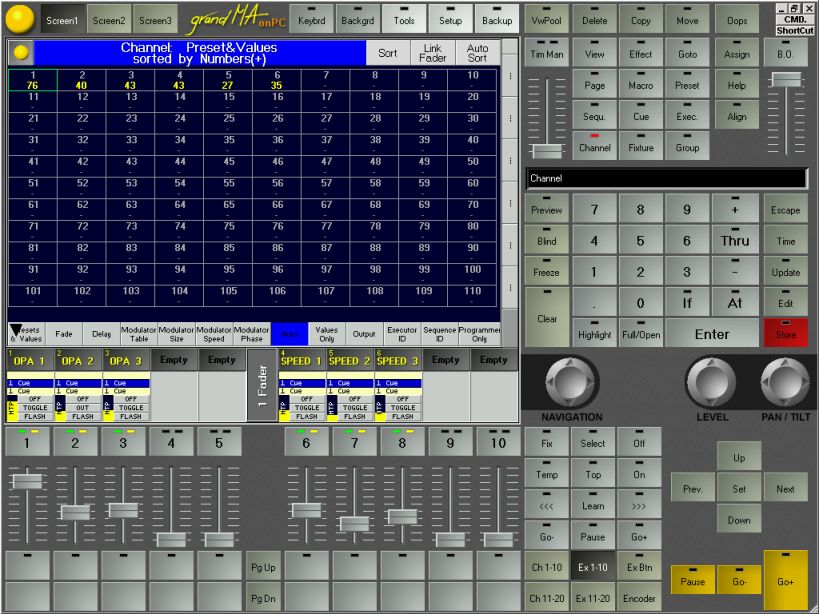 In real life (filmed in Crap-O-Vision) it looks like this: Fader 1 is connected to layer 1’s opacity, guess where faders 2 and 3 are going…

Faders 6 to 8 are connected to each layer’s speed value:

Off course, you can also use the Flash- and Toggle- functions:

Or select the active layer and the active video clips via GrandMA’s ExecuterButtons. “Absolutely astonishing, Bob. I just cannot believe they didn’t invent this years before!! ”

This means that you can create anything from an automated “5-second-500-clip-10000-effects” video nightmare up to a complete show (or anything in between, like…really complicated snippets or something sensible). All available at the click of a button.

Anyone who ever worked with GrandMA before and / or is familiar with the ease of programming chasers surely understands how cool this is.  Even if you are NOT doing lights with it this might be an interesting alternative for a road-tested damn cool hardware controller.

Now let the creative juices flow: Leave aside Resolume: Take Arkaos (the cheap Midi version instead of the DMX one) or …or…or…Control Ableton with your lighting desk…or take a MidiTranslator and send Emails with it….damn I love this thing =-).

I’ll give it a try and make it donationware. The program is fully functional but shows a 20-second nag-screen at its start. You can download it here . Please make sure you installed MidiOx before running the Software.