Night of the Graduates November 2014

Due to various reasons (and only some of them are cool) I haven’t done a lot of jobs as a lightjockey within the last 2 years. But destiny seems to be on my side at the moment and so I had the chance to do the lights and visuals at the ‘Graudate’s Ball 2014’ in Osnabrück. the whole event was very professionally done so it was very much like an industrial event. Dates like these are mainly characterized by a rather fixed timetabel and a somewhat limited necessity for pure creativity and next-generation-visuals. It has to work and it has to work on time. That’s why you are there, that’s what you are paid for (mostly).

The event already started with a delay. I had to get from Hamburg to Osnabrück and was more than an hour late even before anything happened at all. Fortunately I knew about the fact that most things were already set up at the venue. This was one of those jobs I’d like to describe as a ‘Kofferjob’. Get there, get out your Laptop and voila! No need for building up an entire stage structure, cabling etc. 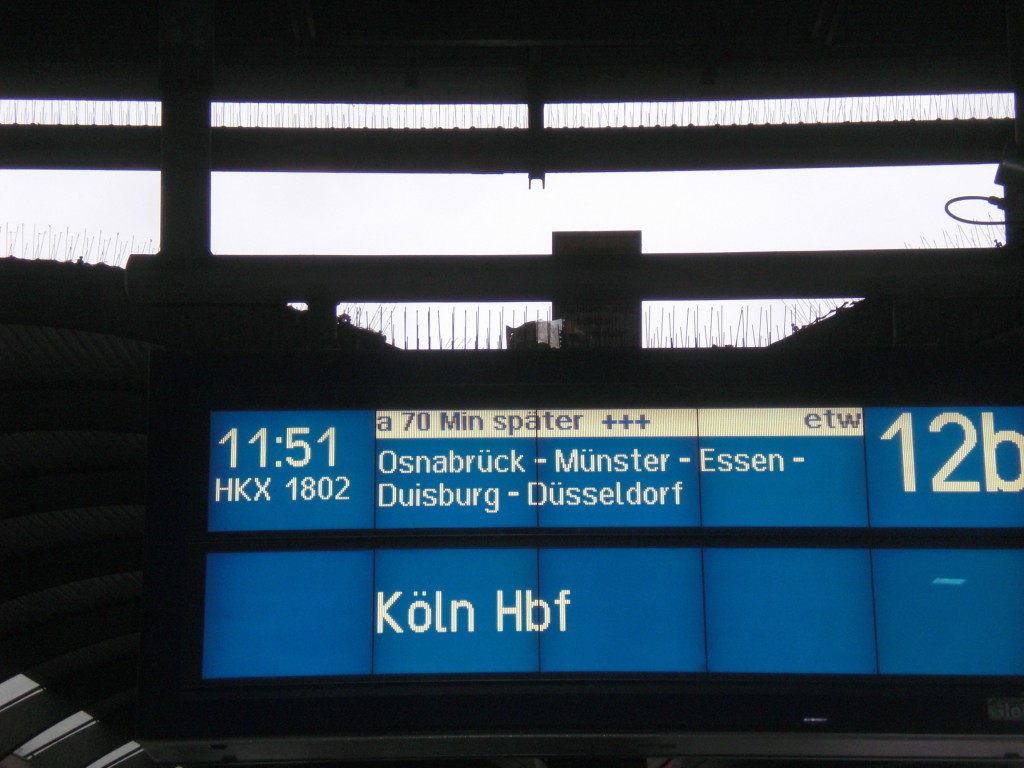 How much everything was indeed already set up beforehand becomes clear in the fact that there is already a laptop with a vj software up and running. Resolume 2 surely ain’t the latest sh*t but we were working with this for quite a few years and never had problems with it. Furthermore, the learning curve is rather flat and people being new to VJ’ing will have a chance to manage this program quickly without having to worry about it too much.

My setup in the foreground: MacBook Pro running VDMX, a Midi-Fighter and an old smartphone running TouchOSC. I ran 3 layers with basic chroma mixing. The Midi Fighter controlled the ‘Disable RGB’ effect on every layer (hence the buttons in red, green and blue) and gave me the possibility to punch in every layer with 100% opacity for some ~spectacular~ impressions.  That’s basically about it. I used TouchOSC to do some subtle settings for opacity, motion blur and Rutt-Etra effects. For an event like this there is not much more that you may need. 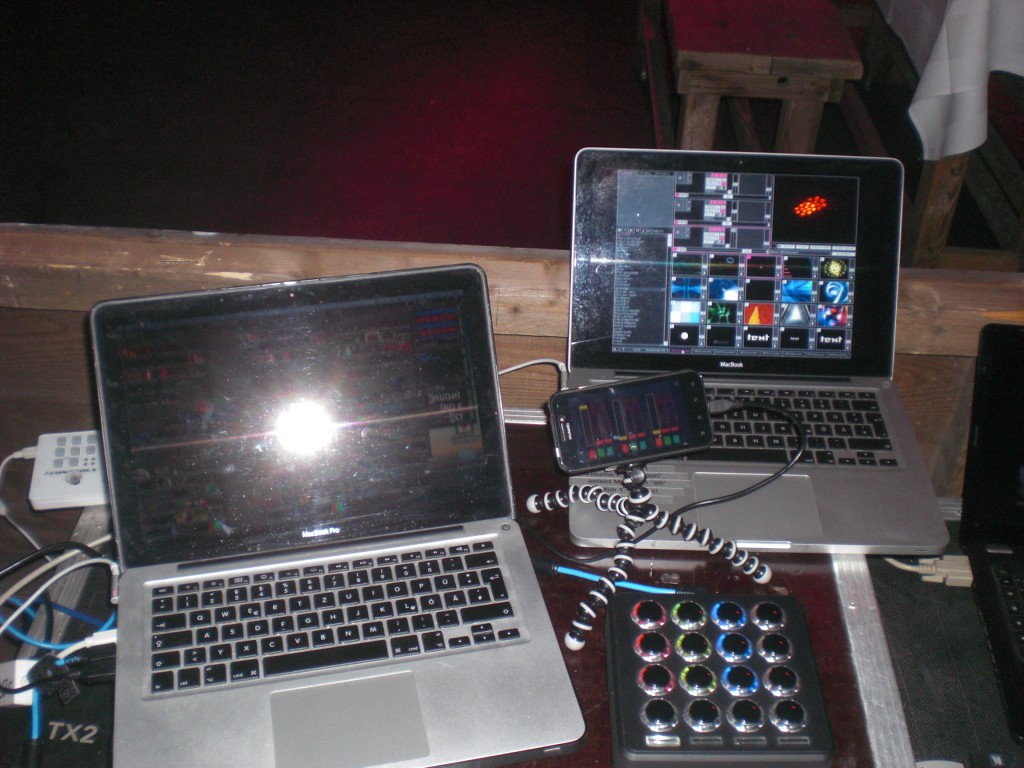 The setup for doing the lights is as classical as it has been the years before: GrandMa onPC with a Midi Keyboard. I thought about controlling VDMX via DMX or ArtNet but gave up on this because the Keyboard was already packed with lighting-controls. I guess there will be a full size console soon and THAT will be fun. Trust me. Then I will be going FULL RETARD on this setup. 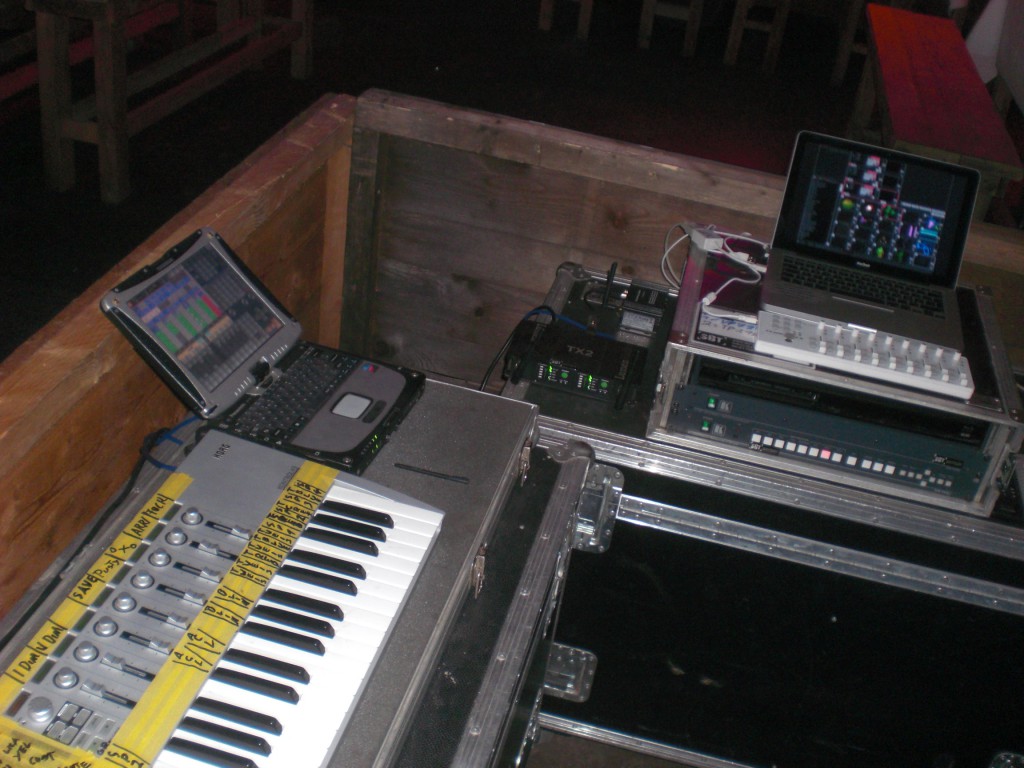 Next to the video rack (with the spare Mac running Resolume on Windows) is another laptop for playing videos provided by the event’s organizers. The two Laptops to the right are connected to the speaker-amps and control these. This IS techpr0n! 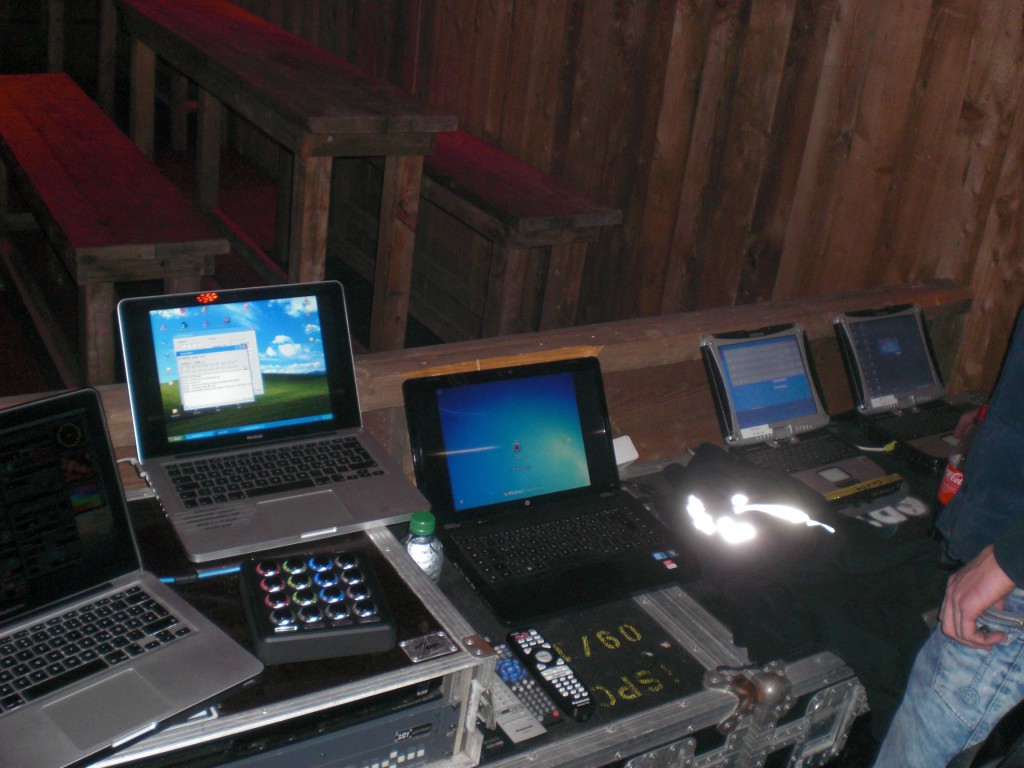 Digico SD9 for the Audio Department. We are not going amateuer today. 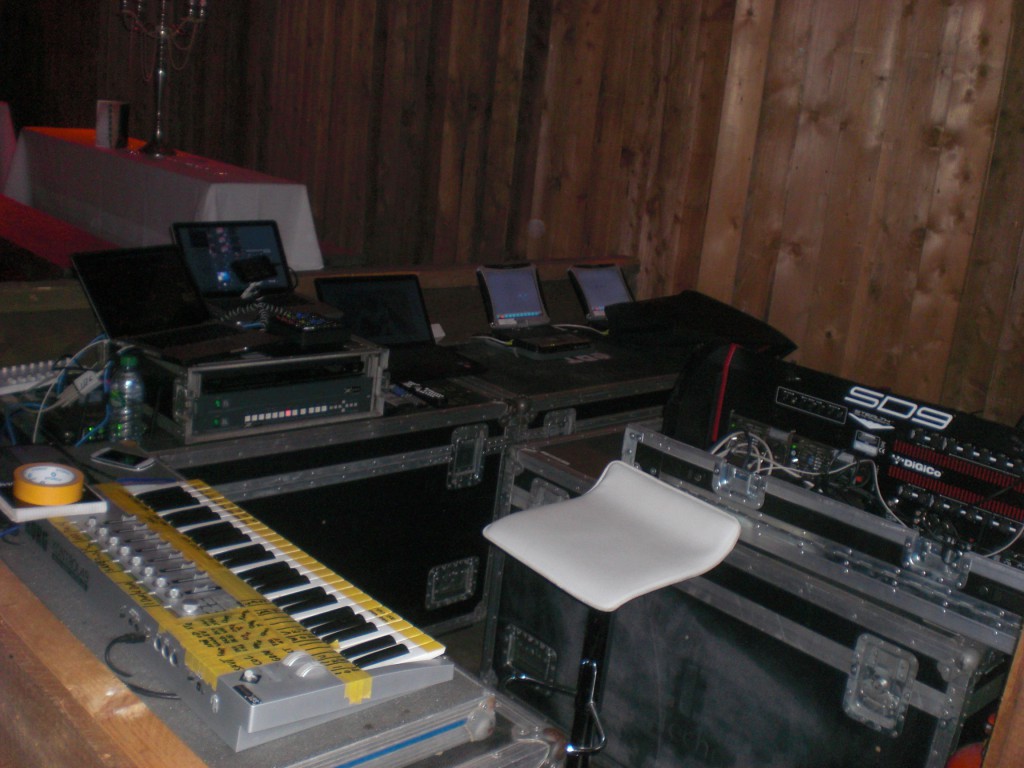 The event itself was rather unspectacular. I you won’t find photos of it here. Be honest: You didn’t come here because you wanted to see these anyways – did you?